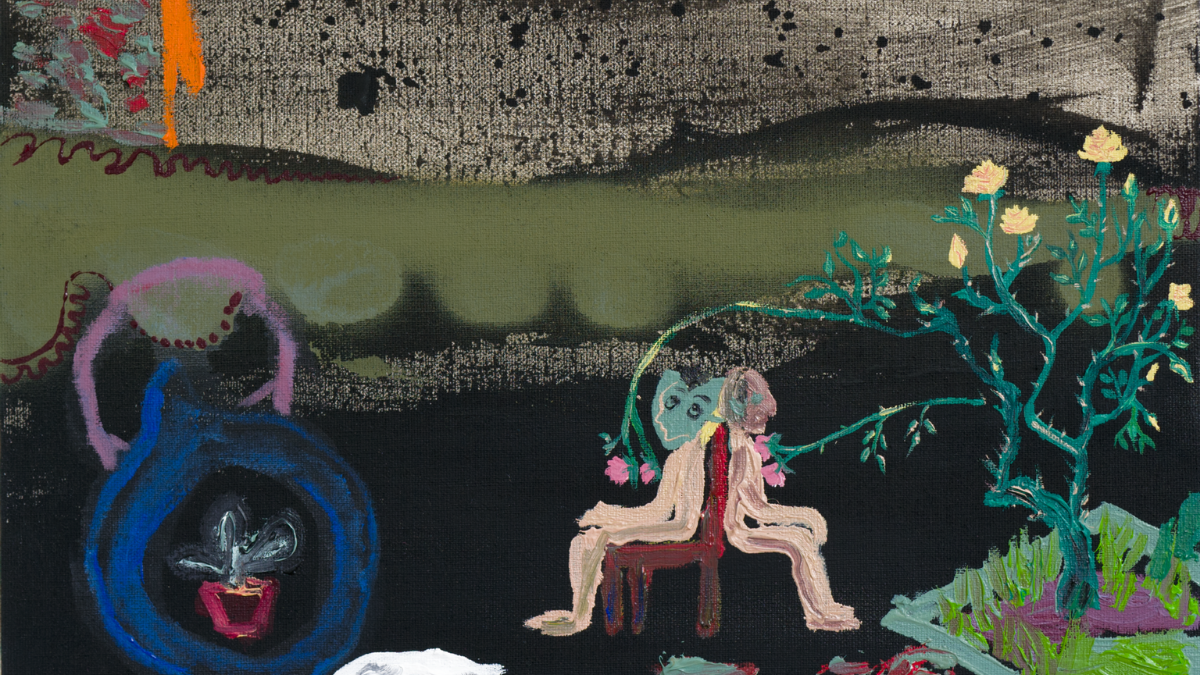 Vortic is a virtual platform for the dissemination of artworks with an international scope that came to rise after the pandemic. Vortic hosts themed exhibitions of galleries and art spaces from numerous cities, thus creating carefully curated content available to collectors all around the world.

One of Vortic’s most recent initiatives is OUT Collective, an international network of 20 galleries that between September and December of this year, via online exhibitions, will donate part of their sales to support the work of visibility, equality and justice pursuit from LGBTQ+ charities such as akt, ELOP, Gendered Intelligence, Queercircle and amfAR – The Foundation for AIDS Research.

OUT Collective adds to other projects developed by Vortic in its desire to relieve artists who do not usually have due exposure, or who have been left aside by the canonical narratives of the historiography of art. This was the case of Female Voices of Latin America, which brought together the work of more than 150 women artists from that region, represented by more than 60 galleries and international institutions.

As part of a collaboration between Vortic, Artishock and Artgonotlar in Istanbul, and aiming to open spaces for under-represented artists, we selected three exhibitions from the OUT Collective project that stand out for their relevance today as socio-political and gender narratives and for their curatorial approach.

By reuniting the work of two Brazilian artists from different generations, Let X=X: Alair Gomes and Hudinilson Jr. is an exhibition of museum standards that explores the pioneering studies of Alair Gomes (1921-1992) and Hudinilson Jr. (1957-2013) on homoeroticism and queerness within the socio-political context of the 70s and 80s in Brazil; a period traced by a military dictatorship and the corset of a heteronormative regime.

Similar to other artists from his generation, Gomes and Hudinilson Jr. made their bodies political tools of dissent; weapons of protest amidst a territory in which the dissident and socially established are disputed to explore the notion of masculinity in front of oppressive practices over historically marginalized identities.

Body, reproduction and machine could well sum up the work of Hudinilson Jr. between the 70s and the 2000s; an “archive” of deconstructed body impressions recomposed multiple times in grid-like compositions that were made through the performative and auto-erotic action of placing his naked body on photocopiers (a documented process which resulted in works of its own character). This experimental exercise, which became a routine of obsessive archiving – and later an “artwork”–, cannot be disassociated from a fierce attempt to proclaim an identity of its own and full of pride. Although it may be annihilated, or dismembered, especially when oppression over the bodies dictated the modus vivendi of Brazilian society.

Curated by Kiki Mazzucchelli, Let X=X: Alair Gomes and Hudinilson Jr. –a title that alludes to rethinking the biological assumptions about sexual chromosomes – also draws parallels between Hudinilson Jr. and Gomes through photographs that document classical, Western and idealised representations in Greco-Roman sculptures. In a slightly broader reading, the union of both artists in a single exhibition reclaims the imaginary of the collective struggle for the freedom of male bodies in repressive and conservative societies, from the time they lived to the present.

For its participation in the OUT Collective, Instituto de visión also links two artists of different generations whose works are woven around common concepts: the body, sexuality devoid of taboos, and eroticism as spaces and strategies of resistance to the mechanisms of social control.

The title of the exhibition in Vortic is taken from his video-production company Warming Up, etc, etc, etc, which in turn derives from the happenings and other actions in which the artist proposed to “warm up” the cultural coldness of the Netherlands through the warmth associated with “Latin-ness” – under an exotic gaze – or through the social interactions, affections and fieriness of sex.

Daniel Santiago Salguero (Bogotá, 1985) turns his gaze to his body by means of black and white self-portraits, almost all in its negative version, in order to “speak of a time of internal revolution in a time of external revolution.” The photographic series presented here, Nrop, was made during 2019, a turbulent year due to strikes, social protests and climate catastrophes, followed by the 2020-2021 pandemic. Having to stay alone on his flat for a year, the artist began a series of selfies that without losing their experimental character, sought to communicate in an artistic way his vulnerability during lockdown. These images, which speak from the intimate, expand from the autoeroticism and the explicit nudity towards scenes of sexually open couples. At this point, the works relate to the evident casualness of Cárdenas’ work.

Daniel Santiago Salguero shares his fantasies for the voyeur under the amateur prism of dating apps, but not without linking –as he explains– the fragility of nudeness with the combative act of being strong in front of a reality besieged by wars, drugs, capitalism, patriarchy, necropolitics and dirty politics. And he does this from a conscious stance on what “viralized photography,” means today. That is, reclaiming the selfie and mobile photo-taking as the image aesthetic of the 21st century.

The exposure to Daniel Santiago Salguero’s nude inevitable directs us to the existing morale present in the large corporations that control social networks, where an algorithm, like an omnipotent God overseeing and controlling everything, rises as the new judge, like a double-standard puritan censor who turns a blind eye to snapshots of an increasingly corrupt world.

For the OUT Collective, GALERIST presents a selection of works by Nilbar Güreş (Istanbul, 1977), an artist who draws on her Kurdish-Alevi cultural identity to encompass universal narratives with a critical perspective on gender. Her work, developed in diverse mediums like performance, video, photography, collage and drawing, establishes a fluid conversation between cultural and identity perception.

The artist explores the political and artistic possibilities of queer and trans-feminist practices through the articulation of playful –and even absurd scenes– starring figures of fluid gender in the drawings, or alluding to the female body and its performative potential brought to the image in the photographs.

Through both mediums, Nilbar Güreş investigates the marginalized identity and minorities’ organisations in relation to prevailing power mechanisms. In recent years, her cultural identity has led her to investigate the practices, traditions and customs of other indigenous communities and groups in countries such as Brazil, Bolivia, New Zealand and Sweden, in order to highlight the parallels and collective histories of colonialism within the dominant Western culture.

A predominant feature of her work is the natural environment in which her characters are inserted. In the paintings, the wild vegetation –cacti, date palms– covers animals and little people, while the photographs portray the essence of assuming oneself as a woman by means of clothing, poses and attitudes when feeling observed. The protagonists of Güreş portraits look determined, assume their sexuality and take control of their desires. To achieve this evident state of empowerment, of comfort with themselves, she places them in their natural environment; consults them on the scene, the stage and clothing that is closer and natural to them. In the process, the artist says, they “strategically transform and modify their surroundings and the spaces associated with it, as well as their own desires and situations.”

Güreş’ paintings are more open and indecipherable. In Welcome to Assland (2020), for example, we see a non-binary figure leaning backwards. The figure is naked  –only wearing a pair of boots and showing off a moustache– with legs spread open to, as revealing the ass, erect a sort of bridge over a lake surrounded by a pine forest. Ayıcık; Das Bärchen (2020), meanwhile, is a small piece made with fast and rough strokes of paint fillings that suggest two figures: that of a nude with mouse-ears leaning, and that of a palm/phallus with two coconut-like testicles.

In My body, my soft desk (2020) a woman is giving birth to – or fornicating? – a large cactus/sex toy, crowned by a flower that can be both part of the plant and her own vagina. A man next to her seems to sing her a song, while a menacing knife, larger than the characters, closes –or leaves open– a scary read about gender violence in our patriarchal systems. 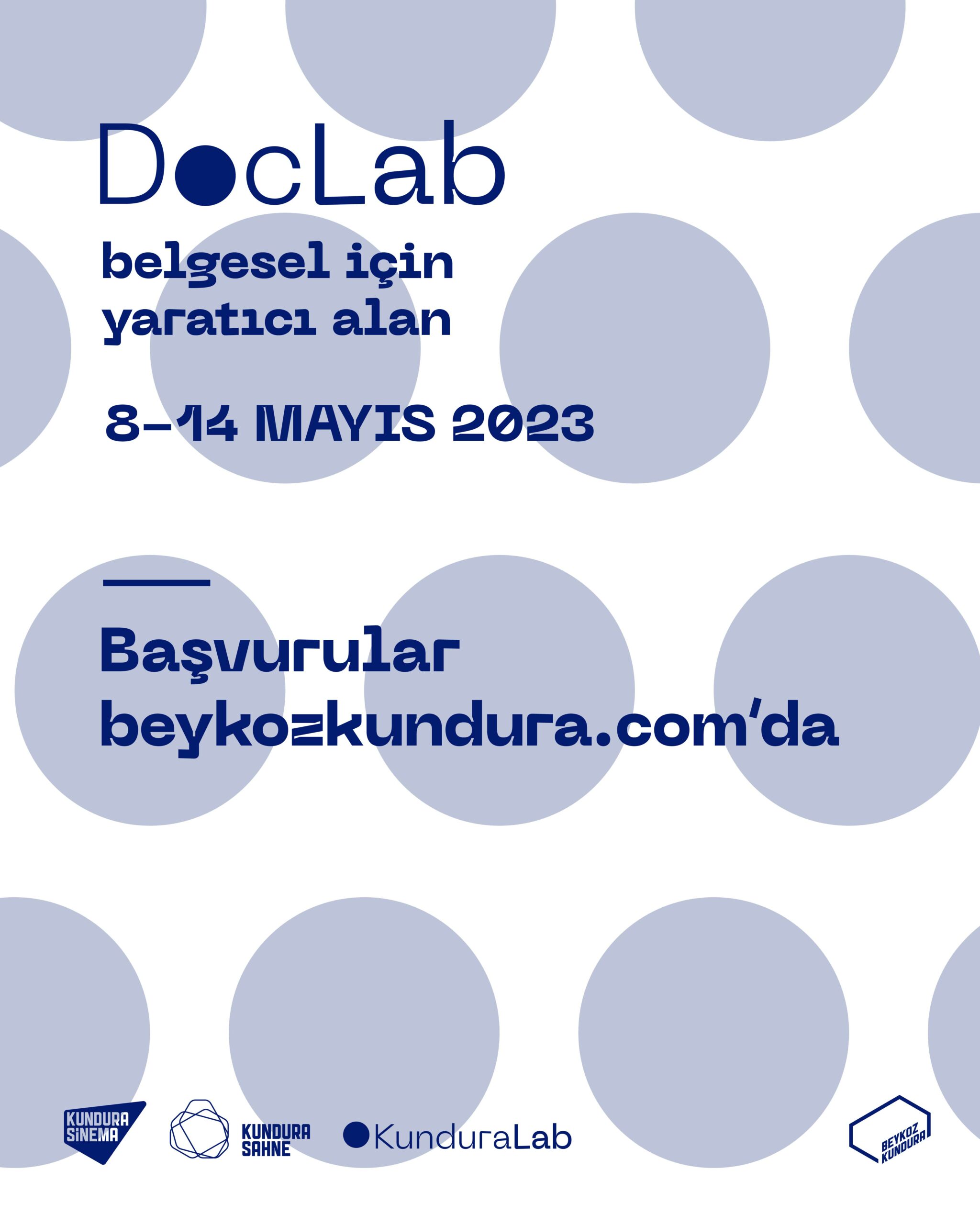 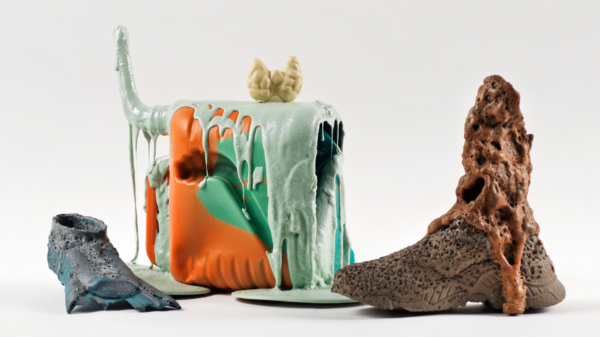 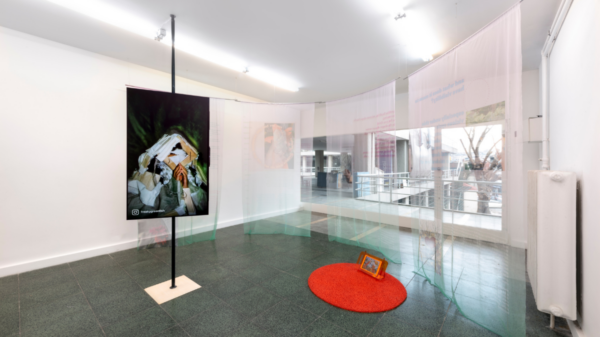 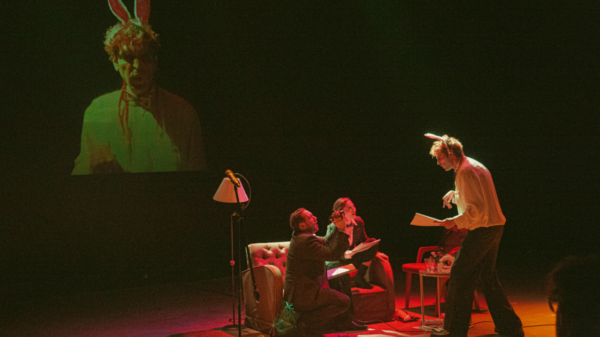 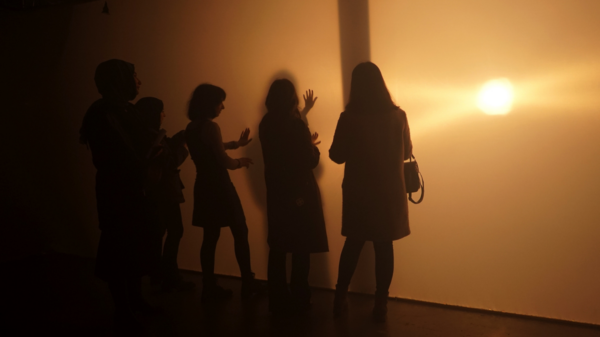